Unless you’ve just come back from a trip to Mars, you’ve probably seen the quarterly tribunal statistics issued by the Ministry of Justice yesterday, showing a dramatic, 79 per cent fall in the number of employment tribunal claims. (But if you need to catch up, this outstanding blog post by Gem Reucroft tells you all you need to know).

In fact, it’s not quite as bad as that, but it’s still very, very bad.

What really matters here is the number of single claims by individual workers. And, compared to a year ago, that is down by 67 per cent. Which is plenty bad enough.

In response, the Ministry of Justice does not appear to have issued any formal statement on the matter (other than the statistical bulletin itself). But the justice minister, Shailesh Vara MP, is quoted in both the Financial Times and Personnel Today as saying:

“We think that the fees are not the only reason for the fall in the number of employment tribunal receipts; there has been a longer term downward trend as the economy has strengthened, and some of the big [multiple claim] cases involving airlines are now being concluded.”

Which, as the following chart shows, is utter hogwash.  The chart shows the number of single claims by individual workers, so the issue of the ‘big multiple claim cases involving airlines’ is irrelevant.  And I challenge Mr Vara and his officials to identify any significant ‘longer term downward trend’ going on here. 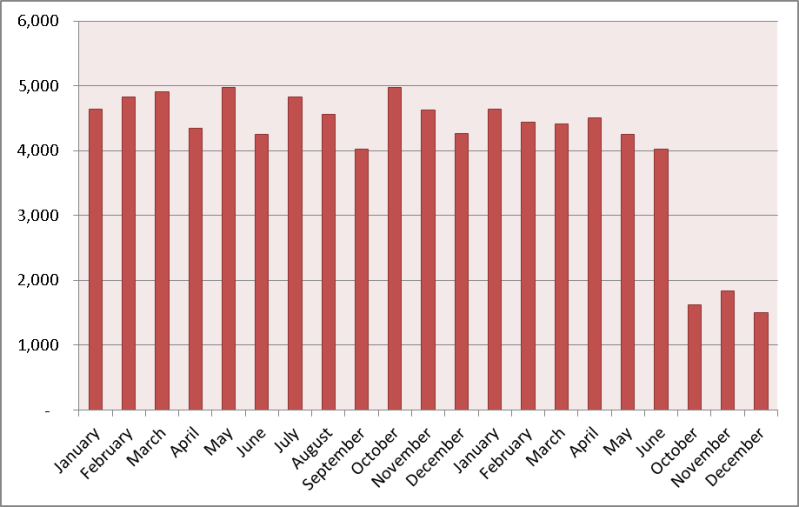 (Yes, I’ve left out the months of July, August and September 2013, because they tell us nothing other than that there was a predictable rush to submit claims in July, before the fees came into force on 29 July, followed by a balancing out in August and early September.)

The simple fact of the matter is that ET claims have fallen off a cliff since the introduction of fees.  But if anyone in the Ministry of Justice can produce a chart or graph showing a longer-term downward trend behind the figures for October, November and December 2013, we’d be very happy to reproduce it here on Hard Labour.