In the days immediately following the High Court’s dismissal, on 17 December, of UNISON’s second application for judicial review of the ET fees regime, I was too busy eating humble pie and shouting “The law is an ass!” at anyone looking vaguely lawyer-like to sit down and bash out a blog. And, in any case, folk such as Kerry Underwood and James Medhurst were doing a fine job of pointing out the High Court Emperor’s lack of legal clothing. So I thought I’d keep schtum and let my irritation subside over the Yuletide break.

But, far from subsiding, over the past ten days my frustration and disappointment has solidified into a certainty that the UNISON legal team did not fail to convince Elias LJ and Foskett J of the detrimental impact of ET fees on workers’ access to justice. The learned judges simply bottled it.

“The [MoJ statistics on tribunal claims] demonstrate incontrovertibly that the fees have had a marked effect on the willingness of workers to bring a claim” and “I suspect that there may well be cases where genuinely pressing claims on a worker’s income will leave too little available to fund litigation.”

“The effect of the new regime has been dramatic … so dramatic that the intuitive response is that many workers with legitimate matters to raise before an ET must now be deterred from doing so because of the fees that will be demanded of them before any such claim can be advanced. For my part, I would anticipate that if the [MoJ] statistics … were drilled down to some individual cases, situations would be revealed that showed an inability on the part of some people to proceed before an ET through lack of funds which would not have been the case before the new regime was set in place.”

In short, the learned judges fully accept the contention at the heart of UNISON’s application for judicial review: that the hefty fees make it exceptionally difficult for a significant number of potential applicants to bring a claim (by consensus the legal test on effectiveness). But they then swerve away from the obvious next step – allowing the application – by pointing out that, as UNISON’s application was not brought on behalf of any individual workers, the Court had not seen any actual evidence of this.

Well, yes. But a jury can justly convict a defendant of murder without having witnessed the fatal stabbing. And a parent dashing from the kitchen to the sitting room, in which his children have been noisily pillow-fighting, can justly conclude that it was his offsprings’ careless exuberance that produced both the sound of shattering glass that induced his frantic dash, and the shattered fragments of glass now littering the sitting room carpet – even if his offspring contend that it was not their fault.

High Court judges are not stupid (or so I am assured by people who are definitely not stupid). So Elias LJ and Foskett J must have known, when drafting their judgment, that what they were implicitly asking of UNISON is nigh on impossible. The jury in a murder trial cannot be transported back in time to the scene and moment of the crime, and a parent cannot be everywhere at once. Equally, even if the hard-working UNISON legal team had been able to find ten, 20 or even 100 potential ET claimants who were deterred by the fees – a difficult enough task in itself – how could it be proven that this was the reason the workers had not pursued a claim?

In court, the judges would not want simply to take each such assertion at face value. And the Lord Chancellor’s counsel would no doubt seek to challenge the merit of each potential claimant’s claim, and to ask why, for example, the potential claimant and her husband had not downsized from their three-bedroomed house in order to fund a claim for unlawful, pregnancy-related dismissal. After all, they would surely only need two bedrooms, even after the birth of their child.

So, let’s assume that the trojans in the UNISON legal team had somehow unearthed the cases of 20 potential but deterred claimants to highlight before the High Court, and that the Lord Chancellor’s counsel had managed to knock out ten of them. By any standards, that would still have been some achievement on the part of the UNISON team. But what would those ten remaining cases have added to the evidence before the learned judges?

The answer is: nothing. It could still have been argued that the ten cases do not amount to a significant number, when set against the overall number of tribunal claims – all ten could just be cherry-picked outriders. And Elias LJ and Foskett J would not have been present when the workers made the decision not to proceed.  So they could just as easily have dismissed the application with the throw-away line that, should UNISON be able to come up with evidence of a more significant number of potential but deterred claimants, “the Lord Chancellor would doubtless feel obliged to address it.” To which one can only say: and pigs might fly. After all, that’s just what the High Court said when dismissing UNISON’s first application for judicial review, in February.

All of which leaves me thinking that, in this case at least, the law really has been an ass. Elias LJ and Foskett J know as well as anyone – including the hitherto emu-like BIS employment relations minister, Jo Swinson – that the fees regime introduced in July 2013 has drastically narrowed workers’ access to justice, to the benefit of dinosaur and rogue employers. But – for whatever reason – the learned judges were not prepared to say so by allowing UNISON’s application, and so embarrass the Lord Chancellor.

The three of us (apart from a handful of court correspondents) who were in Court 2 of the Royal Courts of Justice on 17 December know this to be true. Maybe Elias LJ delivers all of his judgments near inaudibly in less than five seconds before scuttling out of the courtroom (after his abrupt departure, we had to ask clearly bemused court officials what he had said). For my part, I am convinced that what I witnessed that day is a very clever man deeply ashamed of his unprincipled and rather silly handiwork. 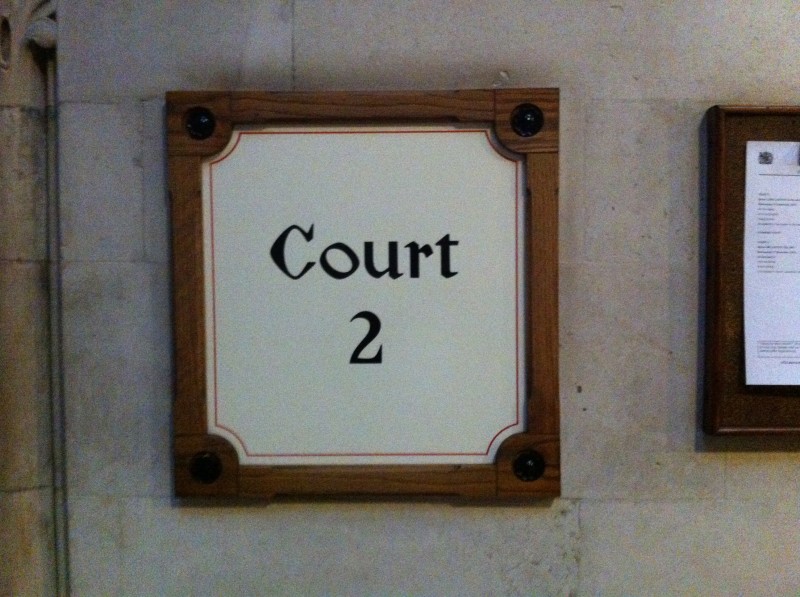 5 thoughts on “ET fees: High farce in the High Court”