On Tuesday, in what might well prove to be her last significant act as BIS employment relations minister, Jo Swinson named a further round of 48 employers found by HMRC to have breached the National Minimum Wage (NMW). The BIS press release notes:

Between them, the companies named owe workers over £162,000 in arrears, and span sectors including fashion, publishing, hospitality, health and fitness, automotive, care, and retail. This latest round brings the total number of companies named and shamed under the new regime to 210 employers, with total arrears of over £635,000 and total penalties of over £248,000.

With this sixth round of naming & shaming coming just four weeks after the last one (of 70 employers, on 24 February), and just two months after the one before that (of 37 employers, on 15 January), it’s clear that the rebooted regime that came into force in October 2013 has finally ground up through the gears to reach full speed. And, were there not a general election on 7 May, we could expect this pattern of monthly BIS press releases, each naming some 50 employers, to continue from now on. Accordingly, now seems a good time to take stock of what has been achieved to date, and what that tells us about HMRC’s enforcement of the NMW more generally. So I’ve been crunching the numbers.

Perhaps the most striking – and significant – aspect of my number crunching is that the numbers are pretty small. Although the 210 named & shamed employers between them owed a total of £638,100 to a total of 5,396 workers, some 72 per cent (3,863) of those workers were underpaid by the three worst-offending employers (in terms of number of workers underpaid, though not necessarily the total or average arrears owed). In 121 (58 per cent) of cases, the employer had underpaid just one worker, and only in 12 cases had the employer underpaid 20 or more workers.

The impression that HMRC’s enforcement net is catching mostly small fry is reinforced when we breakdown the 210 employers by sector. From the following chart (which shows only those sectors with two or more of the 210 employers), we can see that 41 – almost one in five – of the 210 employers are hairdressers or beauty salons, and 37 (18 per cent) are a pub, restaurant, cafe or hotel. Only three care homes or home care firms have been named & shamed to date, and in those three cases the arrears owed per worker were just £178.76, £162.81, and £87.68 respectively. Yet, as noted previously, there is broad agreement that at least 200,000 of the social care sector’s 1.5 million workers are unlawfully paid below the NMW. 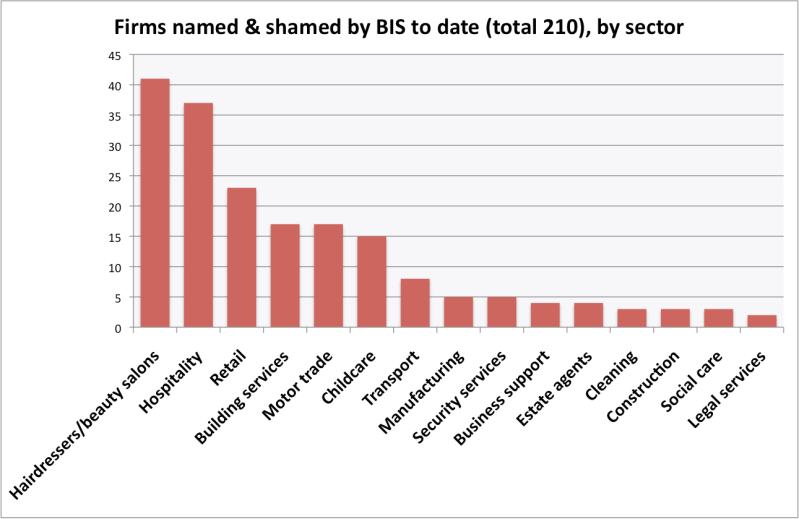 Yes, there are a few household names among the 210, including (in this week’s round) French Connection UK, Foot Locker, 99p Stores, Pizza Hut, and Bounty (UK) Ltd, which produces the ‘Bounty Packs’ handed out to new mothers. But most such cases appear to involve what Jo Swinson calls “irresponsible mistakes”, rather than the employer “wilfully breaking the law”. French Connection, for example, owed an average of £44.78 to 367 workers, while fellow high street fashion retailer H&M owed an average of just £4.82 to 540 workers.

All in all, the detail behind the headline numbers suggests that whoever has Ms Swinson’s job after 7 May should do rather more than simply decide whether to continue with the monthly BIS naming & shaming press releases. It’s time that HMRC’s enforcement net started catching some of the bigger (and nastier) fish in Britain’s minimum wage rogue lake, as well as the small fry. And that may well require new priorities, new strategies, and (even more) new money.