On 24 July, as I was busy lying on a beach in Portugal, the Department for Business Innovation & Skills (BIS) and the Equality & Human Rights Commission (ECHR) published the first findings of their joint, £1 million research study into pregnancy and maternity discrimination at work. Though you could be forgiven for not realising, from the associated press and media coverage, that the study was very much a joint enterprise between BIS and the EHRC. For the current crop of ministers exhibited no desire to associate themselves with the outcome of an initiative announced with some fanfare by their Conservative colleague and then minister for women and equalities, Maria Miller, in October 2013.

Mrs Miller – now chair of the newly-formed women and equalities select committee – did at least manage to tweet a call for ministers to “act to stop employers flouting [the] law protecting pregnant women”. And former BIS minister Jo Swinson – seemingly the driving force behind the 2013 decision to commission the research – went further, describing the findings as “sobering” and using a blog for Mumsnet to call for “a zero tolerance approach to [such] discrimination”. But from prime minister David Cameron, current minister for women and equalities Nicky Morgan, justice secretary Michael Gove, and BIS ministers such as Sajid Javid and Nick Boles, there was not a peep.

This is, to put it mildly, disappointing. For the BIS/EHRC research findings are not just sobering, but shocking. Despite the vast majority of the more than 3,000 employers surveyed for the research reporting that the statutory legal rights relating to pregnancy and maternity are reasonable and easy to implement, the 18-month study found that:

You’d think ministers first elected (in 2010) on a manifesto promising to make Britain “the most family-friendly country in Europe” and positioning themselves as the ‘true party of workers’ might have something to say about such authoritative research findings.

However, as Ros Bragg of Maternity Action noted in the Guardian, they might then have to explain not only why they’ve done nothing to address what amounts to a significant deterioration in the position of pregnant women and new mothers in the workplace over the past decade, but also why they have acted to make it far more difficult for women to challenge their employer and obtain justice. In particular, they might have to explain why, since July 2013, women wishing to pursue a tribunal claim for pregnancy, maternity or other discrimination have had to pay up to £1,200 in upfront tribunal fees.

Pursuing a tribunal claim has always been a daunting prospect, especially for pregnant women and new mothers, and – as the following chart shows – the number of claims for pregnancy-related detriment or dismissal has never been huge. But the number of such claims has fallen by 40%, from an average of 126 per month before fees, to just 75 per month in 2014. 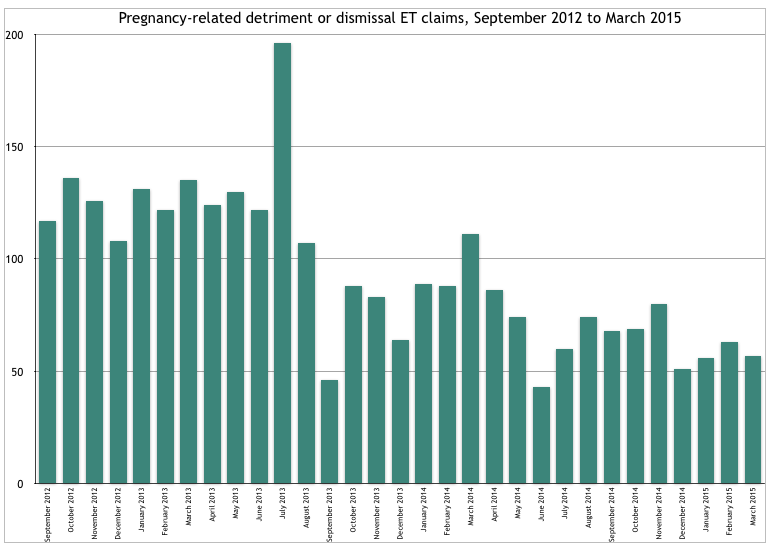 In other words, in 2014 just 893 (1.6%) of the 54,000 women who, according to the meticulous BIS/EHRC research, were forced out of work on account of their pregnancy or maternity leave issued a tribunal claim against their former employer. Not so much a ‘zero tolerance approach to discrimination’ then, as a charter for dinosaur and rogue employers. Yet, as noted by Sally Brett of the TUC, this is hardly surprising when one

“pauses to consider what a new mother is dealing with: sleepless nights, a newborn baby demanding round-the-clock attention, a significantly reduced income, and increased expense. No wonder so many women find it so hard to find the time or energy to research the law, seek advice and lodge a well drafted legal claim within three months of the discrimination they have suffered. No wonder that so few feel ready to stump up £1,200 to get a case lodged and heard at tribunal.”

That government ministers should have nothing at all to say about this is troubling enough. But Cameron, Morgan, Gove and Javid were hardly put to shame by their ministerial shadows. Labour’s press office did put out a brief statement by shadow equalities minister Gloria De Piero – “It’s time to look at how we can strengthen the law and scrap tribunal fees so cost is never a barrier to justice” – but otherwise the silence from Labour MPs, including the four leadership candidates, was almost as deafening as that from government ministers. As far as I can tell, neither Yvette Cooper nor Liz Kendall considered the issue worthy of their comment, despite their (laudable) record of highlighting such discrimination, and the pink bus stayed locked away in its garage.

Such reticence from the party that Liz Kendall describes – in a campaigning piece issued just five days after the launch of the BIS/EHRC research – as “the greatest champion of equality and opportunity that our country has ever known” is mystifying and, it must be said, deeply depressing. It may well be time, in the words of Maternity Action’s Ros Bragg, for ministers to “move beyond family-friendly rhetoric to delivering practical solutions to this persistent and growing problem”, but shadow ministers have yet to deliver any credible rhetoric. It’s not as if the issue is that complex – tens of thousands of women are being forced out of work simply for having babies. And if the Labour opposition really has nothing to say about that, then it’s no surprise that government ministers feel able to sit on their hands too.