WARNING: This blog post contains words of praise for the Tories.

This post should have appeared on Hard Labour a couple of months ago. However, when I realised what I would be saying, I had to undertake a course of cognitive behavioural therapy. But I’m all right now.

Between 2000 and 2013, while working as employment policy officer at Citizens Advice, I wrote a deadly boring series of research and policy reports arguing for a consolidation of the three main labour market enforcement bodies – the Gangmaster Licensing Authority (GLA), the Employment Agency Standards Inspectorate (EASI), and the HMRC minimum wage enforcement team – into a single Fair Employment Agency fit for the 21st century, with the legal powers and resources to “root out the rogues” without imposing unnecessary regulatory burden on the great majority of compliant employers.

In the reports – and in any number of shorter articles, parliamentary submissions, campaign leaflets, and conference presentations – I noted that, all too often, vulnerable workers are too fearful of further victimisation or dismissal to issue an employment tribunal claim, the principal means of enforcing most statutory workplace rights. And, as a result, rogue employers can profit from exploitation with near impunity.

From the outset, my proposal was firmly opposed by the Great Protector of workers’ rights, the TUC. Protecting workers’ rights is a job for the trade unions, not government, I was told. And union membership was now growing so rapidly that all workers would be unionised by the 26th century. Well, all workers in whatever remained of the public sector in the 26th century, anyway.

However, as few if any of the tens of thousands of vulnerable, exploited workers seeking advice from CABx would live to cheer the arrival of the TUC’s cavalry, I plodded on. Occasionally, I would win over a key policy actor – the then Equal Opportunities Commission, the Institute for Public Policy Research, the trade union Unison – only to watch them get nobbled by the brothers and sisters at the TUC.

Then, in early 2006, the Labour government became interested, announcing – in a DTI policy document, Protecting vulnerable workers, supporting good employers – that “we need to ensure that vulnerable workers are not mistreated but get the rights they are entitled to.” Policy officials at the DTI (or was it BERR by then?) made encouraging noises. And in 2007 I was invited to join a Vulnerable Worker Enforcement Forum, chaired by the employment relations minister. This included senior officials from the enforcement bodies (including the HSE), as well as officials from each of their sponsoring departments, and my friends at the TUC were there to ensure nothing significant ensued.

Sure enough, when the Forum concluded in August 2008, having decided to do little more than create a single telephone gateway to the enforcement bodies – the Pay & Work Rights Helpline, since abandoned and rolled-up into the Acas helpline – the minister, Pat McFadden MP, told me that, while he agreed a Fair Employment Agency was a great idea, he couldn’t be arsed with all the inter-departmental wrangling that would be involved in setting one up. (To be fair to Pat, what I think he meant was “Gordon Brown won’t let me, and I can’t spend two years arguing with him”).

Fast forward to 2011, when (I’m told) the Coalition’s first employment relations minister, Ed Davey MP, used to wave a copy of my last report for Citizens Advice on the issue at BIS officials and demand to know “what we are doing about this.” Not a lot, seems to have been the answer, and in July 2012 a ministerial review of “the existing workplace rights compliance and enforcement arrangements, to establish the scope for streamlining them and making them more effective” quietly concluded that a single agency “would not provide significant benefits to workers.”

However, the idea appears to have stuck around in someone’s head, because in October 2014, at the Liberal Democrat conference in Glasgow, then business secretary Vince Cable MP quietly announced that his party’s manifesto for the May 2015 general election would promise a new Workers’ Rights Agency combining the remits of “the minimum wage enforcement section of HMRC, the working time directive section at the Health & Safety Executive, the BIS Employment Agency Standards Inspectorate, and the GLA.” According to Cable, this “joined-up enforcement approach” would “ensure the minority of unscrupulous employers who break the law do not get away with undercutting other employers who play by the rules.” So, there would be significant benefits to workers after all.

In the event, Cable’s clumsily-named Workers’ Rights Agency didn’t make it into his party’s 160-page manifesto, though when asked about this his then junior minister Jo Swinson tweeted “the idea’s still there.” By which Ms Swinson appears to have meant “the idea’s now been stolen by the Tories.”

For, while the Tory manifesto was as silent on the idea as those of the Liberal Democrats and Ed Miliband’s pathetically timid Labour – of six references to ‘enforcement’ in the Tory manifesto, five are to enforcement of immigration law, and one is to “tackling aggressive parking enforcement” – within a few weeks of his Clegg-free return to Downing Street, David Cameron announced the creation of “a new enforcement agency that cracks down on the worst cases of exploitation.” And Part 1 of the Immigration Bill – which earlier this week I watched being hand-delivered, all tied up in green ribbon, from the Commons to the Lords – establishes “a new statutory Director of Labour Market Enforcement, responsible for providing a central hub of intelligence and facilitating the flexible allocation of resources” between “enforcement of the national minimum wage by HMRC, the regulation of employment agencies by [EASI] and the licensing of legitimate labour providers by the GLA.”

The consultation document states that “the Director will have a high public profile as a leadership figure for labour market enforcement and against exploitation of workers,” and will “set out an effective and coordinated plan to promote compliance in areas where the intelligence indicates a threat of labour exploitation or greater levels of non-compliance. The Director will also need to be able to call on any of the enforcement bodies to assist in the implementation of that plan.”

So, eat your heart out, brothers and sisters of the TUC. What Labour’s Pat McFadden and Gordon Brown couldn’t be arsed to do when they had the chance, and what the Liberal Democrats couldn’t even find space for in their 160-page tome of liberal do-gooding, the Tories are now doing, just like that.

Sure, it’s unfortunate they’re using an Immigration Bill to do so, and naturally a lot will depend upon that ‘total envelope of available funding’. But if the new Tory Government had simply wanted to diminish (or even abolish) the GLA, EASI and minimum wage enforcement, it could quite easily have done so without going to the trouble of creating its Director of Labour Market Enforcement, and without proclaiming its determination to “bring to justice those who are exploiting workers [and] stop such exploitation happening in the first place.”

So, well done you Tories. And now I’m going to go and lie down for a bit. 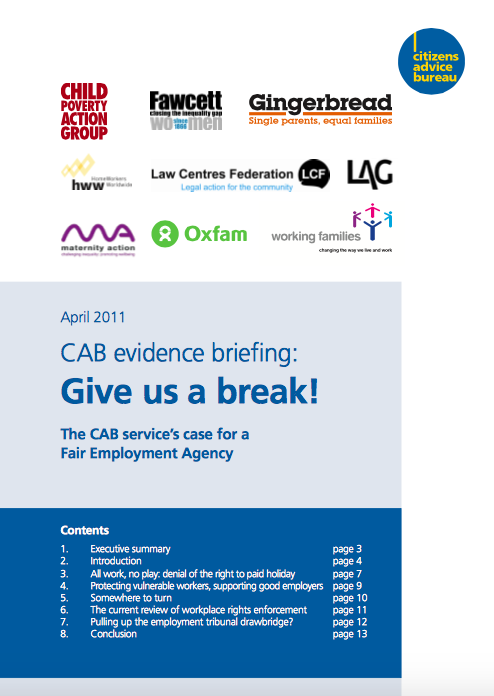